The Incredible Life and On-going Legacy of
Thomas Francis Meagher

A new musical by Neal Lewing

Thomas Francis Meagher is pictured right. To the left, Mike Gillpatrick (as Meagher) joins a cast of 20 Montana actors and musicians in No Coward’s Epitaph For The Musical’s World Premiere

An Irishman. A rebel. A Brigadier General. An orator. A hero. A mystery. A Montanan. 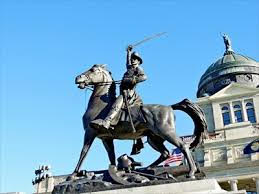 Discover the passion, intrigue, action and romance behind the man
on horseback outside the Montana state capital as his astonishing
story is told on the musical theatre stage!

At Polson Montana’s beautiful Theatre
on the south end of Flathead Lake.

LIKE ALL THEATRES ACROSS THE U.S., WE ARE THANKFUL FOR YOUR CONTINUED SUPPORT!! – NEAL AND KAREN LEWING – PRODUCERS FOR THE PORT POLSON PLAYERS